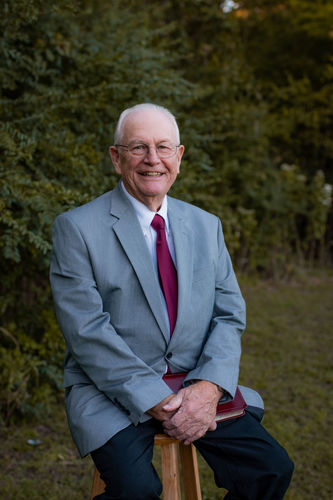 Roger Horton hails from Delight, Arkansas (correctly pronounced Dee-light) and is married to the former Clyda Sue Henderson. They moved to Mabelvale in 1965 and raised two sons, Kent and Brad, who are faithful Christians. Brad attends the Mabelvale congregation as well, where he serves as a deacon and leads the singing.

Roger said, “I have all the bad habits: hunting, fishing, golf, and bluegrass music.” This observer has known of Roger taking different young men from the congregation and teaching them the finer art of hunting and fishing. Under his tutelage, some have caught “the big one” and some have killed their first deer.

In 2001 Roger became an elder and has worked closely with the benevolent program and advertising as well as other aspects of the local work. He and Brad own the family business, Horton and Horton Printing, and his expertise in this area has supplied the church with tracts, the weekly bulletin, and advertising materials. He says that he is proud of the work at Mabelvale, especially through the teaching program and through programs involving our young people that help them develop their future leadership roles in the church.

Roger believes the goal of the congregation should be to continue to trust the Bible in the decisions that are made and in the practices of the congregation. He views it as a privilege to serve as an elder in a congregation that cares about the welfare of one another, is liberal in their giving, and who supports the elders in their work to help all be better Christians.